My brother came to stay last night.  He has a lot of opinions that I don’t always agree with, but I always try to listen and appreciate his point of view.  He slept in our lounge so he was witness to my early morning routine today.  I stagger downstairs with the fluffy family and the baby, I make a cup of tea, put on Peppa pig and go to feed the hungry, leaping fluffy ones.

My brother was horrified that I was leaving my little man with Peppa pig to keep him company.  He launched into an explanation of how I was sexualising him and that most children’s cartoons were evil.  He started going through the offerings that Netflix had to give, he was very annoyed with most of the choices available.  He settled on a cartoon called samurai Jack as according to him it teaches team work, perseverance and honour.

As I drank my cup of tea, he got annoyed that my little person was not even half as interested in samurai Jack as he had been in Peppa pig I began to wonder.  Am I accidentally charging my son’s brain up with sexy, piggy nonsense? Does he not want to see things unless they are festooned with dancing willies? I did a bit of reading and there seem to be cocks littered throughout all of our childhood favourites. 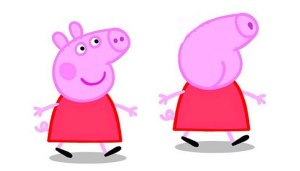 My first thought was, “He has his own penis, why should it harm him to see other penises?” Then my tired brain realised that his penis doesn’t have a family in welly boots that jump in muddy puddles.  Just because as adults we can look at this and see a penis, would he?  My brother thinks yes, and after a quick google search so does much of the internet.

I want my son to grow up as a balanced young man, who treats others with respect and grows to have fulfilling relationships.  Am I setting him up for failure by showing him accidental harmful images?  The “pornification” of children can cause them to grow up too fast and put themselves in situations that are dangerous to them.

When I was a child my family moved to Brazil, we did not have a TV because my Dad said that even the adverts were pornographic and that it was not suitable for any of us to watch.  I obviously made friends with other children and watched illicit TV at their houses.  The kids TV presenter then was called Xuxa (pronounced shoesha)  She danced around in bikinis and did lots of bum wiggling.  I thought she was great.  Now as an adult I can see why my Dad didn’t want me going around wiggling my bum at everyone, but at the time it seemed harmless.

The dance of Brazil is the lambada, my friend taught me how to do it.  One day as my friend and I were playing and practicing our dancing, my Dad came home from work and saw us.  He went MENTAL.  I couldn’t understand what his problem was, I was having fun with my friend, all the other Brazilian girls danced like that, I was just having harmless fun. I was ten years old.  My mum got her friends to send underwear and swimming costumes over to us from the UK as the only ones that we could find in Brazil were thongs and tiny weeny bikinis for children.  I was envious of the other girls clothes because you have a built in desire to fit in as a child.  My parents refused point blank to let me dress like a mini street worker and I was so upset with them.  Looking back I can see now exactly where they were coming from and I am so glad that they stuck to their guns, far from being uptight and prissy, they were trying to protect me from sexual predators.

I was eleven years old when I returned to the UK, I had a few engagement rings from much older boys that I had naively accepted as pretty jewellery, not understanding that they were expecting me to marry them.  There was one boy who was seventeen and had a motorbike that my Dad saw me having a ride on the back of.  I have never seen my Father as angry as he was that day, holding this boy up by his collar against a wall and shouting, very scarily in his face.  I thought he was the biggest kill joy going, it was like he was making it his mission to ruin my life (insert stroppy flounce here).  Thank goodness my Dad was there to protect me, I was clueless to the intentions of this guy, I am so lucky that nothing bad actually happened to me then.

My parents tried to shield us from all of the horror of the world for as long as possible.  My Dad has always said that you can’t unsee things, so it is best not to put things in your head if they are not going to be good for you and build you up emotionally.

So I am now thinking more like they did.  Just because a hugely flawed society tells you that something is ok, do not accept it without first looking into it.  The old, if everyone else jumped off a cliff would you do it too? is something to think about.  Do I trust the mega money corporations that put things out in the world for us to digest?  No, no I don’t.  So should I just blindly turn on the TV and trust that they have the best interests of my child on their mind?  No I shouldn’t.