October is an expensive month for my little family. We have both our Son and Daughters birthdays this month.  We are only a few weeks away from Christmas so every penny is watched very carefully.  There is an expense that seems to be attempting to rear it’s head that is really irking me though, Halloween. I love Halloween and all of the spooky things that come with it, but I hadn’t ever thought as far ahead in life as to how I would feel about Halloween with children.

As a child I never had Halloween.  It wasn’t popular at all, it was something that you saw in films and television that American children got to do.  I was jealous as a child that we didn’t get to have a fun holiday that seemed to only mean dressing up in fancy dress and getting sweets.  Dressing up for a nativity play or getting Easter eggs after a super long church sermon on Christ dying for our sins just wasn’t the same.

I remember asking my parents why we didn’t do Halloween.  They explained that it was a symptom of the sin and sickness in the USA and we should be glad that people weren’t devil worshipping around our streets and trying to frighten people or threatening them with nasty tricks unless you gave them sweeties.  As a child of a devout Christian family I accepted my Dads very succinct explanation and never really questioned it again until my teenage years.

Imagine my confusion when I find out that it is in fact a Christian holiday (probably created to draw attention away from the Pagan festival of Samhain)!  So we could have had fun dressing up and eating sweets whilst we lit candles and remembered all of our departed loved ones.  I was highly unimpressed, but not that surprised as my Dad, who I had considered the fountain of all knowledge for my childhood, had not always known the answers and had heavily swayed everything he told me to suit his own interpretation of the bible or his opinion.  By the time I had discovered this though, following his rules and Christianity had become much less important to me and I threw myself into whatever I wanted to with wild abandon.

So I have attended Halloween parties in gruesome costumes that became scarier (and skimpier) with age.  They have always been lots of fun, but have still not had anything to do with remembering the deceased for me.  It has mainly just been a jolly good drinking session with friends and lots of brilliant horror films to watch, two of my favourite past times.  The last time I  dressed up for a night at work for Halloween at a bar, I had to hide from the child as I left the house. There was liquid latex bits of pretend hanging off skin with loads of fake blood on my face and down my neck.  I won the scariest costume out of the bar staff, a few customers didn’t want to get served by me because I creeped them out too much.  I was really pleased with myself, apart from my zombie nurse a few years earlier, I think it may have been one of my best efforts to date.  I know it will be a good few years before I can dress up like that though, or my children will have terrifying nightmares for months. 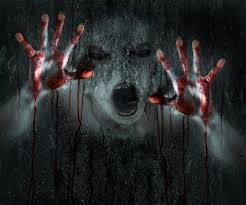 Now I am a parent I am expected to do Halloween for my children.  I thought that I would be totally up for it.  Maybe its a hangover from the teachings of my childhood, but now that it comes to it, I don’t know if I am ok with it.  Someone gave my son a chocolate ghost in his birthday presents and when he saw it he smiled and said “snowman”.  I thought that was adorable and didn’t correct him.  Mainly because I don’t want my newly three year old child to start to think about mortality if he doesn’t need to yet, or to think about whether or not the spirits of people roam the earth never at peace, how do you explain the idea of a ghost to a little kid?  Most of the Halloween imagery that I have been around is fairly gory and scary, I know that they have a more child friendly version out there, but where do you draw the line?

What is a vampire? werewolf? goblin? ghoul? zombie?  Why hasn’t Mr Tumble done a lets have fun with zombies episode yet?  Because, I expect, it isn’t appropriate.  So how far do we go with our little ones?  And how on earth am I supposed to know what he will or won’t find scary?  I saw Les Miserables when I was eight and had a recurring nightmare about it for a year afterwards.

The preschool that my son attends has sent a letter home telling us that there will be a fancy dress day for Halloween, which we have to pay an extra fee for them to attend and finishes earlier than a normal preschool session (hmmmm not really that pleased with being charged extra for less).  So I must go and make/buy my child a costume to wear lest he be the pariah in his class that isn’t taking part (which I can confirm SUCKS).  I like fancy dress and I hope that he will too, so I have accepted that this is going to happen.

But what do I dress him up as?  Nothing that is going to be upsetting or scary I suppose, but also nothing that is going to raise subjects that I don’t want him to have to put in his beautiful little head yet.  Will other parents feel the same though?  Or is all of this trying to shield him from things utterly pointless if he comes face to face with a horde of the undead in a few weeks at preschool?  Am I totally overthinking this and will he not care at all anyway?  Will he just think there are a bunch of funny looking snowmen everywhere?  It is going to happen eventually.  I can’t wrap him up in cotton wool because it is not a good way to prepare him for being in the world that he lives in.  He probably isn’t as sensitive and delicate as I worry that he might be.  I am aware that I am more than likely worrying over nothing and he will have a super fun day and get given loads of yummy things to eat and he will want every day to be Halloween.

I am NOT however on board with trick or treating.

I won’t be taking my tiny, precious, little people to the streets at night time and knocking on the doors of strangers asking for sweets.  I don’t think that I will ever be ok with that.  How do you know what people are giving to your children for starters?  That seems like an awful lot of trust to put in people who you don’t know and are bothering in the evening.  Also the prospect that you are supposed to punish the unsuspecting people at home if they don’t have gifts to give to your children is utterly baffling to me.  Every other day of the year we tell our children NEVER to accept sweets from strangers, or trust them and most certainly DO NOT go to their homes! So why on this one day of the year would I as a parent want to scramble that safety message in the heads of my children?  A very quick google search will throw up a load of children’s books designed to let them know that talking to strangers is a no go.  We had long school assemblies about it as a child, told to go and find a teacher or a parent and tell them straight away if it ever happens.  The people who would harm our children don’t take a night off for Halloween, so I can’t see this being a risk that I would ever be ok with taking.

So now the holiday which I looked forward to with gusto has become a whole different thing in my head.  It is too expensive and a potential safety risk for my children.  How did this happen?  Why does nobody warn you before you have kids that you will lay in bed awake at night wondering at what age to tell them about made up scary creatures? I genuinely sat and wondered if I should be showing him Scooby Doo as an introduction to scary things in the run up to Halloween and then spent ages trying to remember how old I was when I saw it for the first time, in vain.

So happy Halloween everyone, but especially those of you who don’t have to worry about anything other than will your costume be cool enough for the party that you are going to.  I am more than just a little bit jealous of when that was the only thing that I needed to think about for it.